The launch of Sputnik, the first artificial satellite on 4th of October 1957 introduced the era of spaceflight. Unfortunately with this great event the problem of space debris was also born. Now, after almost 55 years of human activity in space a constantly increasing amount of space debris represents a tremendous problem for today’s and future space missions. This actually not only compromises manned space missions but first of all also affects intact satellites – especially those on orbits that are relevant for earth observation missions. The main source for this debris are disused and abandoned satellites. Space debris colliding with each other with extremely high relative velocities of a few thousands of kilometers per hour are amplifying this problem. The effect is that even if we stopped launching satellites today the amount of debris would still increase. This snowball effect is called Kessler syndrome. It is estimated that about 60000 debris larger than one centimeter currently surround the earth. At present about 5500 tons of debris are orbiting the planet in the Low Earth Orbit (LEO, <1000km), there where 90% of all satellites are located. This amount increases annually by about 5%. 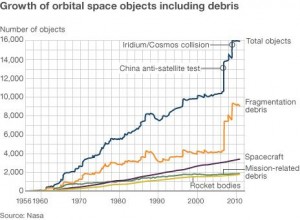 By now it is mandatory for new satellites that their resting time in orbit after their end of life shall be shorter than 25 years. The achievement of this requirement makes it necessary to develop new de-orbit technologies.

In modern rockets the burned rocket stages reaching orbit altitudes are taken back by a final deorbit boost in order to let these stages burn up in the atmosphere. For energetic reasons satellites in the geostationary orbit (GEO) are lifted to a so called graveyard orbit. In LEO the aerodynamic drag due to the earth’s atmosphere is high enough to accelerate the deorbiting of a satellite. This means that no additional propellant is needed for this maneuver. By using a dragsail at the end of life of a satellite this aerodynamic drag can be increased. Theoretical considerations are showing that a 4 kg satellite in an 800 km orbit could be deorbited in less than 7,5 years with a 5 m² dragsail.

At the Institute of Lightweight Structures at the RWTH Aachen University (ilb) Mr. Dipl. Ing. Patric Seefeldt has already worked extensively on the theories of different deorbiting strategies. [1] Furthermore Mr. Seefeldt has designed and built a first demonstrator of a deployment mechanism for a 5 m² dragsail. Now the next objective at ilb is to bring this mechanism to operability for a small satellite.

Unfortunately there are not many experiences in the domain of the deployment of such large lightweight structures in microgravity conditions until now. Since then some members of our team are concerned with that complex of problems. The idea for our experiment EDOD (Experimental Deployment Of a Dragsail) arose out of that context. The launch at the the top of an orion rocket on a ballistic trajectory of more than 100 km altitude now gives us the great opportunity to test the deployment and our mechanism for a 5 m² sail under realistic conditions – no atmospheric disturbances and microgravity. Here the effect of the sail in its deorbiting function as a dragsail is not to be analyzed. So the qualification of the dragsail for this deorbiting task will be still to investigate after EDOD.
With EDOD we hope to enhance the comprehension of the deployment kinematics of a dragsail. This knowledge could then leave its mark on following projects and by this way make a contribution to the solution of the problems due to space debris.